REYKJAVIK, ICELAND – MAR. 28, 2019: Struggling Iceland-based budget airline WOW Air announced today that it is ceasing operations immediately. The airline has cancelled all flights, stranding passengers around the globe. WOW Air released a statement outlining passenger rights and where to get up-to-date information. You can read the official statement here: https://wowair.com/travel-alert/ 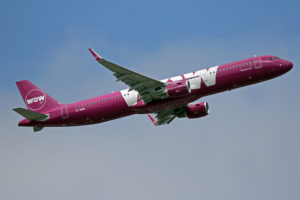 The airline announced the closure in a statement posted to its website on Thursday. It advised passengers to book new flights on other airlines, and said some may be eligible for compensation.

For stranded passengers, Icelandair is offering immediate assistance to WOW Air passengers who have booked flights between today and April 11, 2019.

The Iceland-based airline is offering re-book WOW Air passengers at a significantly reduced rate. WOW Air passengers should go to Icelandair’s website for further information. Here is their link: https://www.icelandair.com/support/contact-us/getmehome/

In addition to Icelandair, other airlines are offering assistance to stranded travelers. These airlines include EasyJet and Norwegian air, according to the Icelandic Tourist Authority.

In WOW Air’s statement the budget airline said that passengers who bought tickets from a European travel agent as part of a packaged tour were protected. Others with travel insurance may also be entitled to claim compensation.

WOW Air said that it may pay compensation “in accordance with European regulation on Air Passenger Rights.” If the airline declares bankruptcy, passengers can make a claim with the administrator or liquidator.
Founded in 2011, Wow Air was known for cheap trans-Atlantic fares on routes via Iceland. It’s part of a group of Nordic airlines that drove ticket prices down thanks to no-frills service.
It’s the latest in a string of airlines to suffer problems as the aviation industry is buffeted by fierce competition and shifting business models.
Primera Air ceased operations in October 2018. In February, German airline Germania filed for bankruptcy and British airline Flybmi stopped flying.