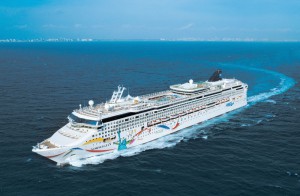 “The ship is now alongside at Heritage Cay, while being inspected, and guests have the opportunity to go ashore.”

19 May 2015 – Miami – Norwegian Cruise Line issued a statement this evening regarding the reported grounding of its ship the Norwegian Dawn which is on a roundtrip cruise from Boston to Bermuda. NCL states:

“On Tuesday, May 19th at approximately 5:00 pm ET, Norwegian Dawn temporarily lost power as the ship was departing King’s Wharf, Bermuda. The ship’s propulsion was affected and, at which time, the vessel made contact with the channel bed. All guests and crew are safe.

The ship has full power and onboard services continue as scheduled.

The ship’s team is currently assessing the situation and we will provide more information as it becomes available.”

UPDATE: 20 May 2015 – Miami – Norwegian Cruise Line provided an update regarding the Norwegian Dawn this morning:

“The ship is now alongside at Heritage Cay, while being inspected, and guests have the opportunity to go ashore.”

Check back with Cruise & Travel Report for further developments.