Seattle, Wa., March 29, 2016 – Small ship luxury cruise operator Windstar Cruises, has announced the promotion of Belinda Bennett to Captain of the MSY Wind Star. Bennett claims several firsts with her appointment including the first woman and first black person to operate at the helm of a Windstar Cruises vessel since the company’s inception in 1984.

Bennett, a British citizen, resides in Southampton, United Kingdom and also claims the distinction of being among just a few British woman cruise passenger ship captains as well as a pioneer for minorities working in the cruise industry, understood to be the first black cruise ship captain.

Bennett’s maiden voyage as Captain set sail on January 30, 2016 with 102 international crew aboard the 148-passenger 5,307 GRT motor-sail yacht Wind Star cruising in the Caribbean. Bennett, 39, shares the title of Captain with an exclusive handful of women currently operating under that role within the cruise industry. As such, Bennett is responsible for directing the operations and activities of officers and crew members on board, including: safety, maintenance, certification, documentation, passenger services and compliance with multi-government regulations. 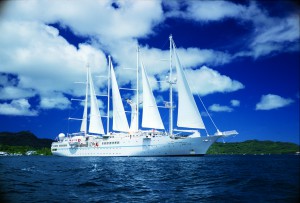 Windstar captains are highly accessible operating under an Open Bridge policy, Bennett is known for being sociable, charming and engaging with Windstar yacht guests.

“We are thrilled to have appointed Belinda as Windstar’s first-ever female Captain and we understand may be the cruise industry’s first-ever black Captain. Belinda’s leadership qualities and hard work have made her an asset to our team and invaluable to her colleagues and crew,” said Hans Birkholz, Windstar Cruises’ chief executive officer. “She has earned her spot at the helm and I’m excited to see her in action, guiding the crew and our guests on Wind Star through some of the world’s most incredible destinations for years to come.”

Hailing originally from St. Helena – a part of the British Overseas Territory, encompassing Ascension and Tristan da Cunha islands – Bennett naturally became immersed with life at sea, having started as a Deck Cadet at age 17 on her home island ship the RMS St. Helena. Just four years later, she climbed the ranks as Third Officer and ultimately stayed on board for an additional five years, until departing in 2003 as Second Officer.

Following a brief stretch as Chief Officer for the SS Delphine, a private charter yacht, and Isle of Man Steam Packet ferries, Bennett joined Windstar Cruises as Second Officer at the Port of Monaco in September 2005. Bennett worked on a variety of Windstar Cruises ships over her 11-year career with the small ship luxury line transitioning to chief officer and now captain.

“Having been with Windstar for the past 11 years, I couldn’t be more honored to serve as Captain with such a respected and hard-working team,” said Bennett. “Earning this title has been a long and exciting professional journey and I’m ready to lead our guests through a safe and one-of-a-kind adventure around the world.”

Noting changes over her decade with Windstar, Bennett says, “I have noticed many younger people have started cruising in recent years, which is good. My priority as Captain is to see that my guests and crew are safe and that guests are having an enjoyable, memorable time on board our yacht and that our crew provides the best service to our guests.”

A lifelong traveler, Bennett shares her advice on cruising, “Disregard the notion that cruising is for the more mature community. There are some fabulous places that cruise ships like Wind Star call at whereby you get to see multiple cities and islands you would not normally see by staying in one place. The activities and adventures cruising offers rival those offered by land-based resorts.”

When asked her favorite ports of call, she shares, “I do so love the Dalmatian coast, the Croatian coast line, and its ports are beautiful and so is the run up to Kotor in Montenegro.”

Bennett points to the shopping to be had in the port of Sorrento, Italy and favors Bequia in the Caribbean for, “the best lobster pizza at Mac’s pizzeria.”

Currently sailing in the Caribbean as master of the 148-passenger sailing yacht MSY Wind Star, Bennett will captain the ship’s upcoming Trans-Atlantic re-positioning to Europe where the ship will enter a 2-week drydock debuting April 16 on the 8-day “Treasures of Southern Spain & Morocco” cruise followed by a 6-day “Islands of the West Med” cruise and 7-day “Enchanting Greece & Amalfi Coast.”

Bennett’s newly appointed title will keep her busy at sea into May, at which time she intends to enjoy a brief break before returning for Wind Star’s summer season in the Aegean Sea, offering a series of 24 consecutive “Greek Isles & Turkish Delights” cruises, Windstar’s iconic 7- day sailings between Athens and Istanbul.