OPEN FOR BOOKINGS FROM JUNE 2015

MSC MERAVIGLIA WILL BE THE FIRST SHIP WITH THREE HOMEPORTS

SAINT-NAZAIRE, April 20, 2015 – MSC Cruises, the world’s largest privately-owned cruise company, marked a key milestone in its $5.4 billion growth plan today as the first steel for its new Vista generation of megaships was cut at STX France, during a ceremony in Saint-Nazaire.

At the steel-cutting ceremony, MSC Cruises Executive Chairman Pierfrancesco Vago told assembled press and dignitaries that the cutting-edge 4,500 guest (double occupancy), 167,600-GRT ship — due to be delivered in May 2017 and open for bookings from June 2015 — will be named MSC Meraviglia. She will spend her first summer sailing the western Mediterranean, and will be the first to have three homeports: Genoa, Marseille and Barcelona.

“MSC Meraviglia will be the biggest and most innovative cruise ship ever built by a global European-based cruise line,” said Pierfrancesco Vago, MSC Cruises Executive Chairman. “We chose a name that denotes the sense of awe and wonderment felt when you experience the ship’s stunning features, which only an MSC cruise, with its unique Mediterranean-style, can deliver. MSC Meraviglia brings together the industry knowhow of MSC Cruises, a young, bold company built upon 300 years of seafaring tradition and the expertise of one of the most advanced shipyards in the world. Today, building started on a true maritime marvel.”

STX France General Manager Laurent Castaing added: “Since March 2014, more than 400 people from our various teams have been working tirelessly to define the special features of a ship that, I am certain will set the standard for its generation. This extraordinary project is testament to MSC Cruises’ visionary approach, and we are proud to collaborate with them through our capacity for innovation and know-how.” 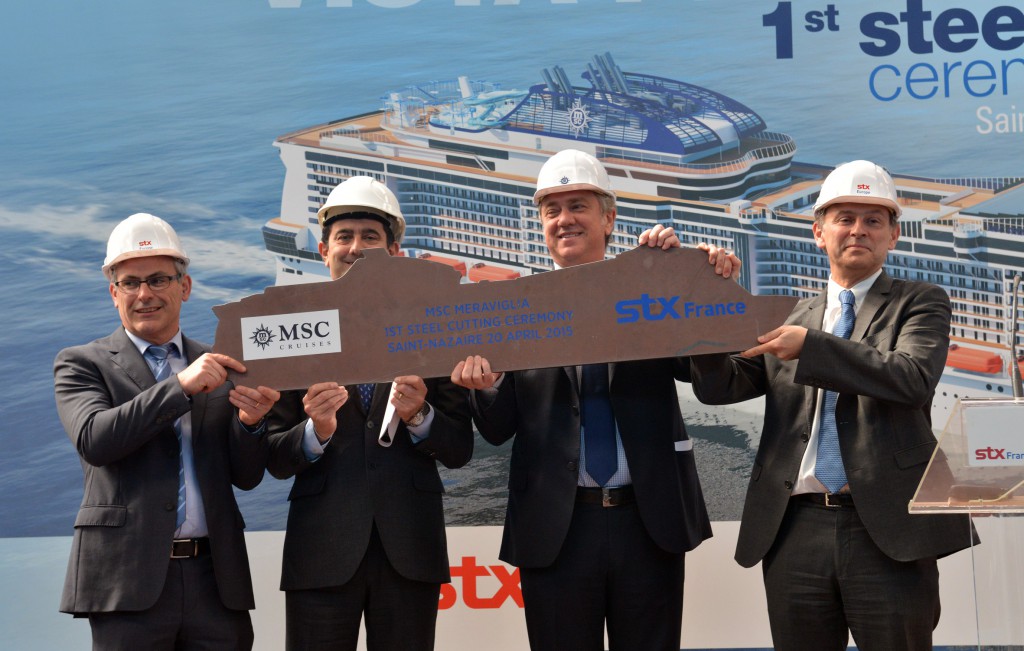 Gianni Onorato, MSC Cruises Chief Executive Officer said: “This steel-cutting event marks a decisive milestone in the company’s development plan, one that will see MSC Cruises double its capacity by 2022 through up to seven new ships and a $5.4 billion investment plan.”

He added: “MSC Meraviglia will be one of the greenest and safest ships in the industry, as well as one of the most technologically advanced. We are thrilled that in just a few weeks guests can start booking this truly remarkable ship, which will bring cruise travellers to the most exciting destinations around the world in outstanding comfort and style.”

Designed for unrivalled agility, MSC Meraviglia and the other upcoming Vista project ships will be perfectly able to call at any cruise port in the world, meaning guests from around the world will now be able to explore more of the best destinations on one of MSC Cruises’ next generation ships.

Among the ships’ manifold features will also be specially crafted ‘cluster cabins’ for families, and an extended MSC Yacht Club, the wholly self-contained luxury area on the prestigious foredecks, which will be enhanced with duplex suites, a vast solarium and a private lounge and restaurant. They will be packed with extraordinary features that make them ideal for cruising in summer and winter, including wide dining options and entertainment choices, stunning panoramic spaces, a large theatre and a spectacular amusement park linked to an outdoor aqua park, as well as a three-deck interior promenade.

MSC Meraviglia will also feature a range of technological advancements, such as ‘Near Field Communication’ technology, enabling guests to do things like make onboard payments, access their staterooms or geo-locate children, simply by using their cruise card, bracelet or smartphone. Another jaw-dropping feature will be a 5,167 square foot LED screen, which forms the entire ceiling of the ship’s interior promenade. Like a digital sky, this LED image vault will beam out compelling images and vistas day and night – including scheduled visual events – creating a variety of powerful atmospheres at all times.

MSC Meraviglia is the first of two identical ships on order from STX France, the second of which will be entered in to service in 2019. In addition, MSC Cruises has options for two further Vista project ships to be delivered by 2022.

The Vista project is the result of a lengthy development process under STX’s ECORIZON® program to create cleaner, smarter, more efficient ships. They will be water emission free, and their hulls and propulsion systems will be optimized for extreme energy efficiency. Scrubber technology will neutralize fumes and CO2 emissions in accordance with the latest international maritime regulations. In addition, the ship is fully compliant with the Safe return to Port requirement.

MSC Cruises, which has grown by 800 percent in terms of onboard capacity since 2004, carried 1.67 million guests in 2014 and generated a turnover of $1.6 billion. For 2015, MSC Cruises is forecasting an additional 10 percent growth.

In other news, MSC Cruises recently announced that the first of its next generation “Seaside” class of ships — set to debut in November 2017 — will be named MSC Seaside. The ship will sail year-round from Miami to the Caribbean. What’s more, the company also revealed that its Miami-based cruise operations will benefit from a newly renovated and expanded dedicated berth and terminal at PortMiami, a testament to MSC Cruises’ growing ambitions in the North American market and to providing guests with a best-in-class quality of services.